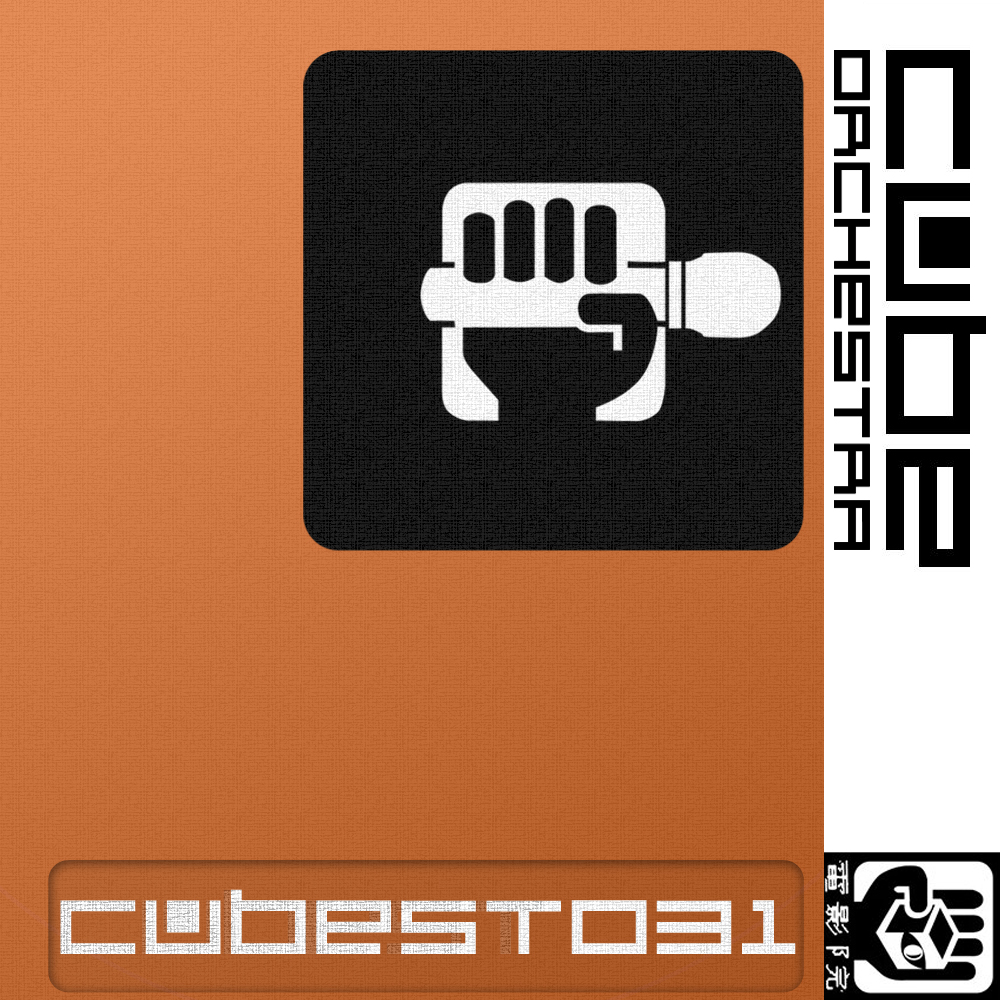 I thought 30 sounded like a good number to stop on, but then two tracks emerged in successive weeks which put a new Cubest back on the agenda and I found myself delving through the back catalogue for more along the same lines

On most Cubest releases I’ve looked for a balance within the music, often because our styles are so varied, but on Cubest 031 I’ve honed in on one specific sound, guitar-led, raw, more like that of a rock band

We’ve had sessions with close to twenty musicians on stage and a dense sound, but here some tunes feature just two or three musicians and the others definitely have the feel of a band, rather than an orchestra, and it's this back to basics approach which shapes this collection. This isn't about technical prowess, it's more about impulse, flaws and all

Cubest 031 presents the orchestra as a band, rocky and raw - to be played at maximum volume ...

Jean-Michel turned up early and helped me set things up, so we found we had a bit of time to ourselves before any others turned up. J-M began grinding his axe and for some reason I placed a tremolo effect over my vocals. That’s it. No big messages, just me reacting to Jean-Michel’s awesome guitar sound

Never Speak Ill Of The Dead

I’m surprised dirges like this don’t crop up more often in our repertoire. Reminiscent of the Velvet Underground, we had no idea it was going to go on for over twenty minutes! This is an abridged version, just ten minutes in length! There’s little to my tentative vocal, some mutterings about the Dead and being respectful, all washed down with lots of echo and reverb. I did what I could with them and cut out the worst bits! It’s actually later that things really begin cooking. Spudd introduces a tribal beat focusing everybody. There’s a nice bit of slide as it builds in intensity, with chanting, turning to throat singing, on and on, until it breaks down for a breather, only to find we're now locked into the same beat, but gentler, with a new chord and it gets quite bluesy. This too went on for ages and presented me with an ideal opportunity for a lengthy fadeout, which I always find very satisfying

Feed Our City (With Love)

When no drummer turns up to a session it’s often left to myself and a handful of others to fill in. Here I start playing synth along to Martin’s bass line, while Jon hunts for something on guitar, but it becomes clear in my mind that what the tune needs to get it going is drums, so I grab my mic and stand and set it up next to the kit and get going. Singing and playing drums at the same time doesn’t come easy to me. Come to think of it, singing or playing drums separately doesn’t come easy to me! A couple of times I go for a vocal line then have to back off to maintain time. It’s really Martin’s bass that carries this tune, a rare case of lead bass. Jon finds some good little riffs to broaden the sound, but there’s little to the tune, a fairly standard format, you might even wonder why it’s here, but I dug it out of the archive and tried it with the others and I think it fits. It has a catchy bass line mirrored in the lyrics

Incidental shorts like this often have a nice feel to them, just whatever the vibe is. In this case the Cube was out of Jean-Michel’s favourite beer, so his ire is fully justified

This was the track that made me collate Cubest 031. It’s utterly prefect. There’s space, lots of interesting sounds and vocals delivered in French. It’s all Jon’s fault, as he’s the one who begins churning out that bass line, actually played on his six-string with the tone turned right down. It’s infectious and informs everything else in the soundscape. So many great short sounds punctuating the space. Martin moves up the scale on bass. Juraj seems to have something going on his Volca Bass, a kind of ticking present in most of the track, allowing him to pick up his guitar and punctuate the tune with power chords bathed in tremolo. Marcus shows great restraint playing odd discordant notes, while Rebecca experiments on piano quietly in the background. I lock into Jon’s line and try to keep the beat as steady as I can. Not very steady at times. This leaves the foreground for Jean-Michel, who emits a stream of consciousness in French, about a guy that says 'goodbye' to the castle he is no longer satisfied with. He intersperses his outbursts with whacked out guitar lines. It’s simply genius. Tragically the recording levels weren’t set correctly and there’s intermittent digital peaking going on as the tune builds in power. Luckily it sounds like it’s meant to be there, adding to the intensity. What you don’t get to hear is a keyboard solo Marcus played late in the tune, edited out as I didn’t think it matched the guitar vibe I’m going for on this album. That said, I like the piano tinkering at the end, as the guitars fade to static

Another stonking bass line from Jon and this time he’s swapped guitars with Martin so it’s really a bass. I'm at the mixer playing melodica, then I try some vocals, but quickly run over to the drums and begin a beat as relentless as Jon's bass line. There are three guitars working over the bass and drums. I’m enjoying Martin’s guitar work. There’s a glorious moment three minutes in when Martin and Jean-Michel’s guitars crank it up to the next level. It felt really good bashing it out and it might have gone on for as long as my arms could manage, Jon being the master of holding a tune, but I could see the screen was open and a film was being projected onto it, signalling that we were out of time, so I brought it reluctantly to an end, conducting with cymbals. Another session beautifully brought to its conclusion and a fine touch of raw energy to bring this album to its own conclusion

Download the zip file here (6 tracks, 34:06 @ 320kbps = 79mb):
https://orchestra.cubecinema.com/zipanddownload.php?f=cubest031
(The files need to be zipped before download. This may take a while, so please be patient ...)

This work is licensed under a Creative Commons Attribution-NonCommercial-ShareAlike 4.0 International License